The FAST Modern Platform is the pinball control system used to power modern (e.g. new) pinball machines. It’s used by hobbyists / homebrew pinball folks who are building their own machines, as well as manufacturers taking new machines into production.

The FAST Modern Platform consists of a FAST Platform Controller (such as the Neuron along with additional boards to provide I/O, lighting, audio, power management, etc.) These boards are small and distributed throughout your machine. 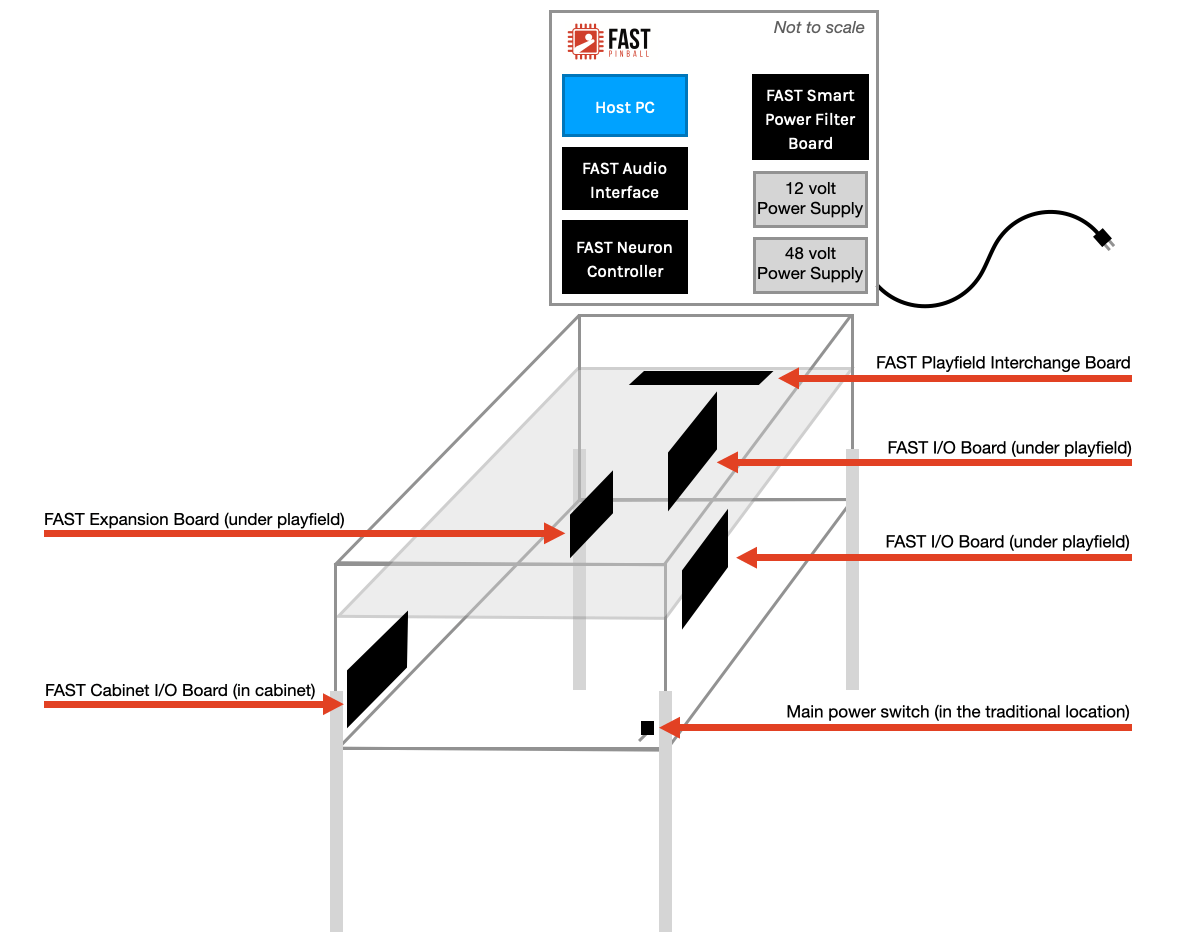 Your game code (Mission Pinball Framework, or whatever you want to use) runs on a host computer in your machine's backbox. You connect the FAST controller to that computer via USB, and when you do, a few new COM ports show up. Then you can send serial commands to the controller, and receive serial messages back. That's it! This virtual serial connection is how you configure drivers, set LED colors, communicate with the DMD, etc., and it's how the FAST controller sends things like switch changes back to your computer.

There are a lot of wires and systems inside a pinball machine! The FAST Pinball modern platform breaks these down into modular boards built around three different cable networks:

This drawing is obviously crazy, so we'll break them down one-by-one:

The FAST I/O Loop Network is a low-latency, ring topology network used for the most timing-critical components of a pinball machine: switches, coils, and magnets. This network delivers communication data as well as power to the I/O boards. (It also passes some other technical things, like system status messages and the watchdog status, as well as being used to update the firmware in all the connected I/O boards during the update process.) The FAST I/O Boards connected to the loop network control all the switches and drivers in the pinball machine.

Here's a look at the FAST I/O Loop network. Note the direction of the arrows, showing how the "OUT" of one board goes to the "IN" of the next board. These I/O boards will typically be located both under the playfield, and in the cabinet.

Why the FAST I/O Loop Network is cool¶

Other notes about the FAST I/O Loop Network

The second cable network which makes up the FAST Pinball Modern Platform is the Expansion Network. This is network connects FAST Expansion Boards in a tree topology and is used to control lighting, LEDs, servos, steppers, and other elements that don't interact with the ball like the switches and solenoids of the I/O loop network.

There are several different configurations of FAST Expansion boards that drive different types of accessories. Expansion boards can be placed under the playfield, in the cabinet, inside a topper, or even built-in to a toy or mod.

Other notes about the FAST Expansion Network

The final cable network in a FAST Modern Platform machine is the FAST Display Network which is used to connect to FAST DMD and segment displays. (LCD displays are connected to the host computer via HDMI, and not part of the display network.) The display network is a point-to-point topology. It's designed for high-bandwidth, one-way data streaming from the Neuron to the displays.