What a weekend! We're just catching up on sleep after an amazing and energetic five days in Chicago for the Chicago Pinball Expo 2022. The FAST Pinball booth was our biggest ever, and packed non-stop! If you weren't able to attend the show in person this year, this blog post provides a virtual booth tour, our reflections of the show, and a link to watch the video of our talk.

First of all, it was awesome to be on the ground in Chicago again after missing everyone for the past few years. As you know, Chicago is essentially the "home" city of the pinball industry, so the Chicago Pinball Expo brings together more folks who are building and creating pinball than any other show in the world. These are our people!

We had a large booth with lots of fun things for people to experience and play, right next to the homebrew row which had even more machines running on the FAST Pinball platform. Let's take a look at what we had for people to play! 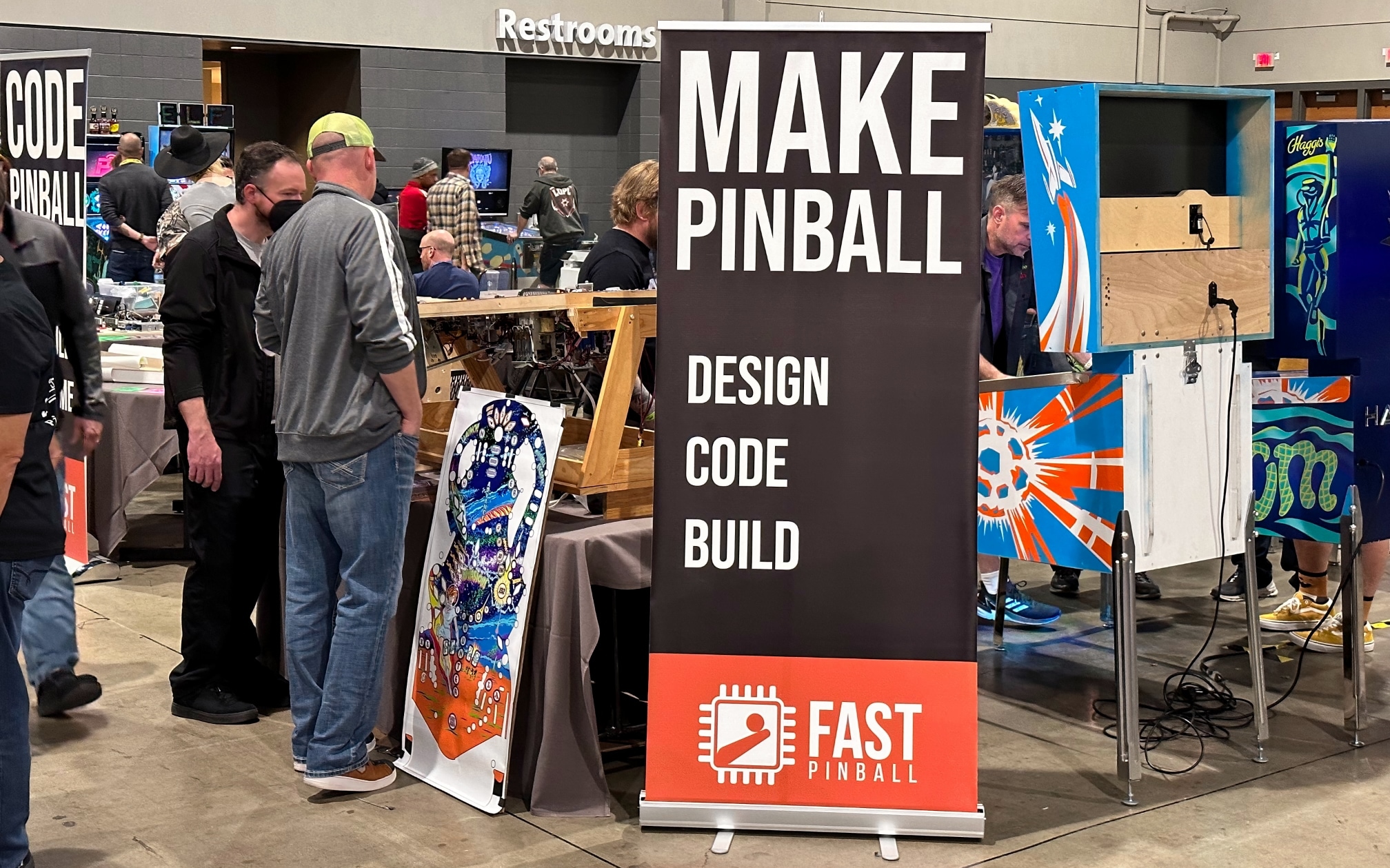 We were extremely proud and excited to let people play classic machines they know and love powered by the FAST Retro Platform. We had three machines from three different eras in our booth: Whirlwind (System 11), Whitewater (WPC-89), and Tales of the Arabian Nights (WPC-95). 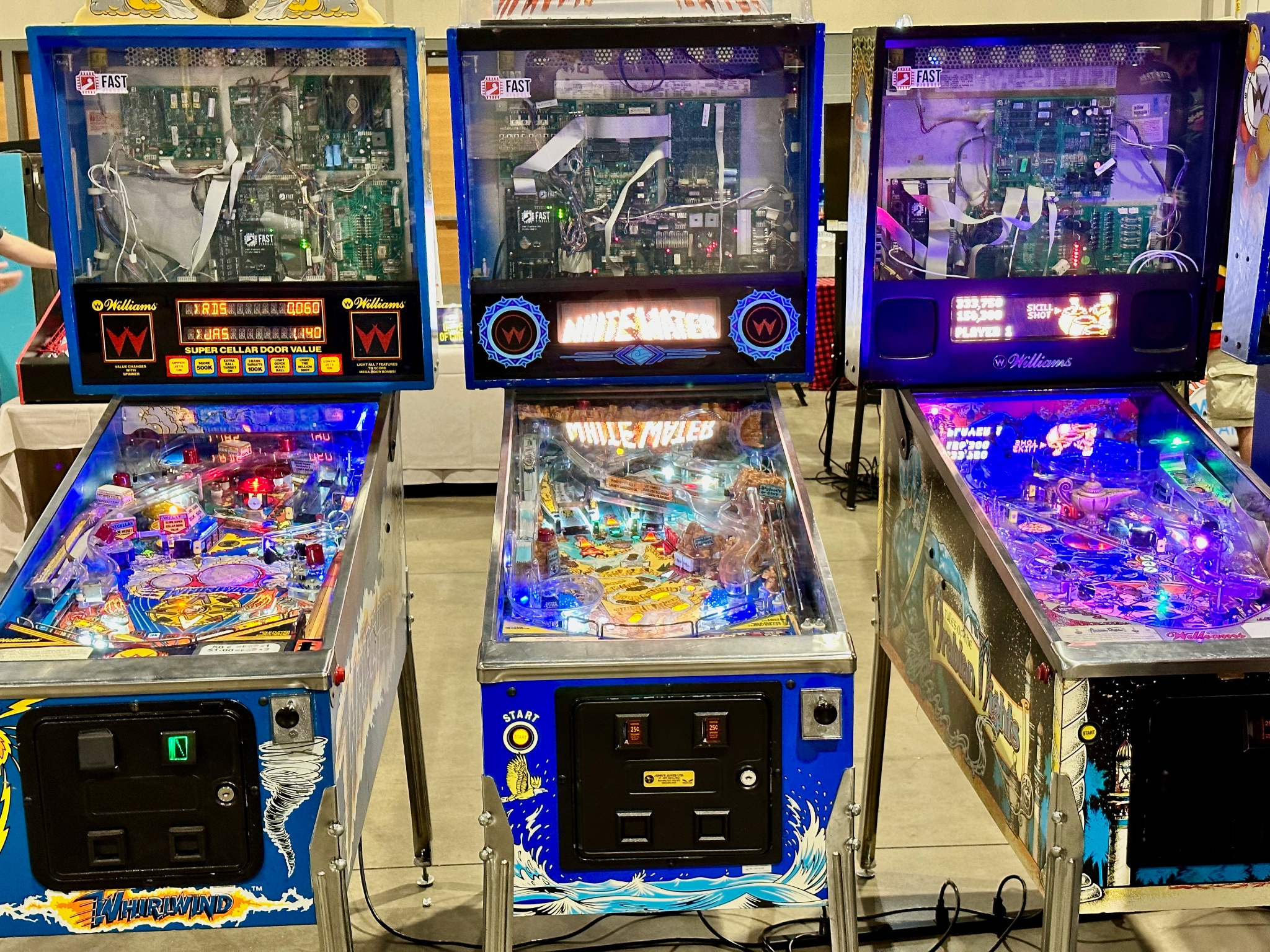 All three of these machines had FAST Retro Controllers installed which ran the original classic Bally/Williams code directly from the FAST controller via our custom-built and fully-licensed emulation layer. We invited members of the public to play the machines to experience how well they played and how they felt indistinguishable from machines which had the original 30+ year-old original MPU boards installed.

At this show we replaced the backglass and light boards on these machines with plexiglass so players could see that these classic experiences were powered by the FAST Retro platform.

We collected a list of little tweaks to make and are excited to get these machines polished up so they can join the other ones already out in public such as FunHouse. (And, once again, a huge shout-out to our FAST Pinball colleagues Dave Beecher and Eli Curtz—the technical wizards who created our retro platform tech!)

While playing the classic Bally/Williams machines powered by modern FAST hardware is fun, the real fun is thanks to our game studio partners who build on top of the FAST Retro platform to create completely new gameplay experiences on classic pinball machines.

While there are many of these projects in development, we showed off two examples in our booth: 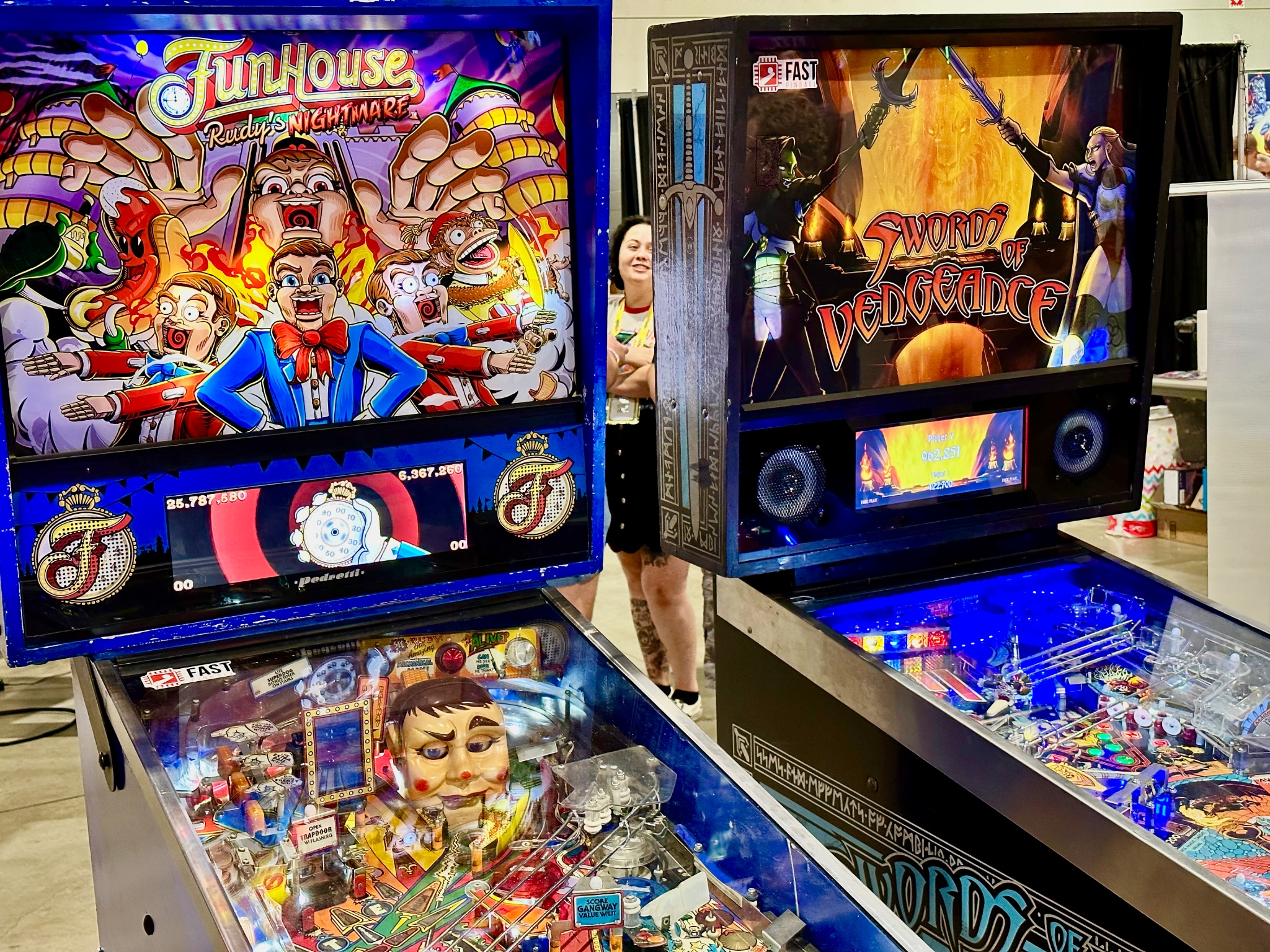 The machine on the left is the Rudy's Nightmare conversion kit from Pedretti Gaming. This kit has been available for sale for about six months now, though there are still lots of people who have never played it in real life. The kit includes a FAST Retro Controller which allows players to experience the brand new game while also still being able to play the original FunHouse classic game code from 1990. (When the machine powers on, the player pushes the left flipper button to play the classic game or the right button to play the new game. The game can be switched at any time by pressing and holding the start button for 5 seconds.)

Show attendees loved seeing how the talented game creators were able to breathe new life and adventures into decades-old hardware, while the FAST Retro platform meant that they didn't lose access to the classic game code they loved.

Moving on, we also had a few examples of machines powered by the FAST Modern platform. 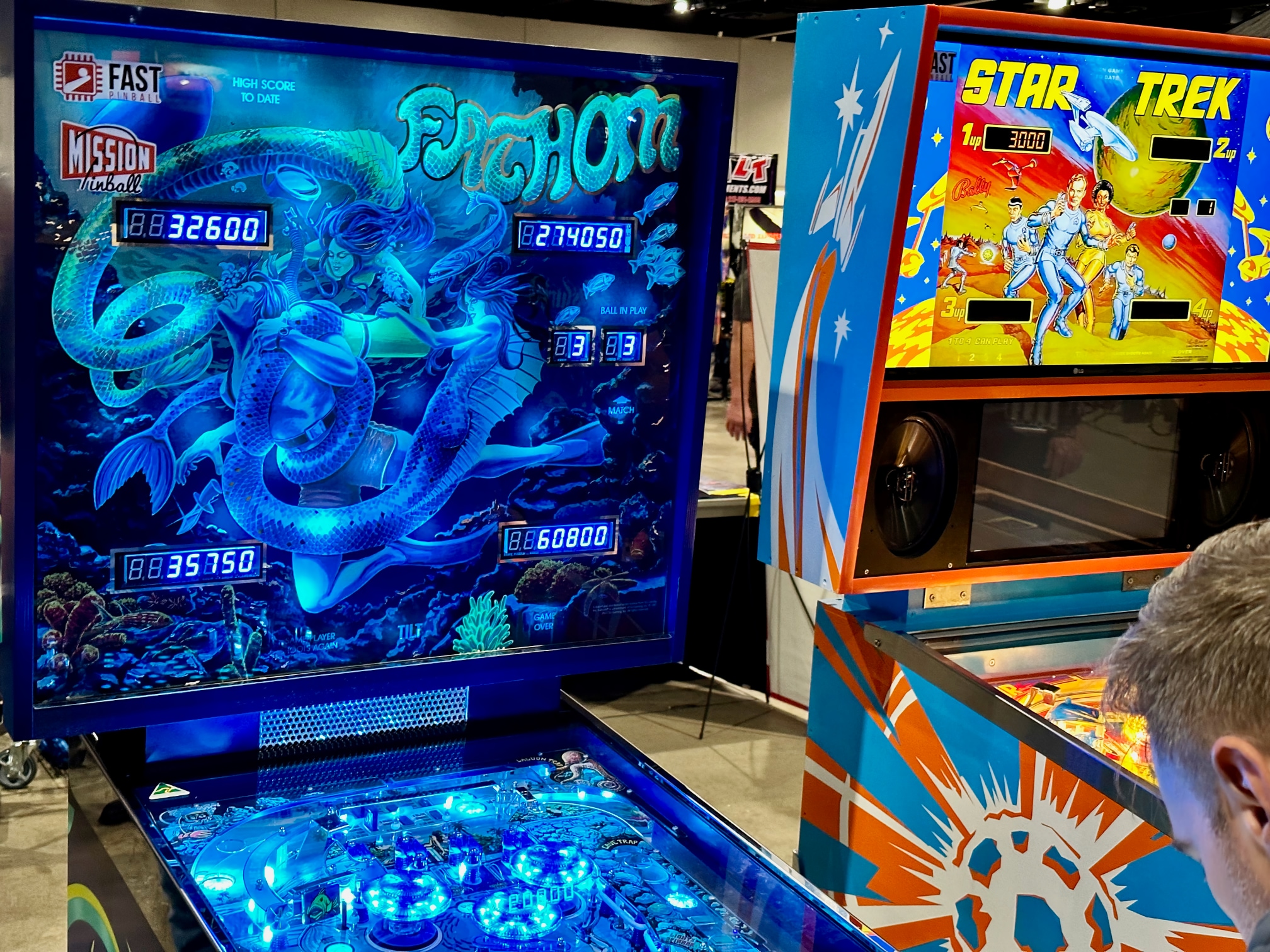 On the left is a Fathom Revisited, from Haggis Pinball. This machine is built on the FAST Modern Platform and runs a FAST Neuron controller, our next-generation modern platform controller which will soon be released to the general public. Fathom players can also choose to play the classic 1980 version of Fathom or the 2022 revisited version which adds modern flourishes and storytelling.

On the right is "Brian's Any Machine", a modular homebrew pinball system created by Brian Cox, based on the existing FAST Nano Controller. When this photo was taken, Brian had a classic Star Trek playfield installed which ran new game code he wrote in MPF. Brian also had an original homebrew creation called Jupiter Crush which he periodically switched out (in addition to over 20 other playfield + new code combinations back at his house. This guy is prolific!)

FAST-powered machines in the homebrew row

In addition to Brian's Any Machine, there were a few more homebrew machines built on the FAST Pinball Modern platform in the Expo's homebrew row.

Tanner Petch brought his Trashland machine, which is a truly unique machine with vertical elements, an upper playfield, a lower reversed playfield, and a main playfield. The entire machine is novel, fun, and fresh, and Tanner shared that it had over 400 games played at the show! 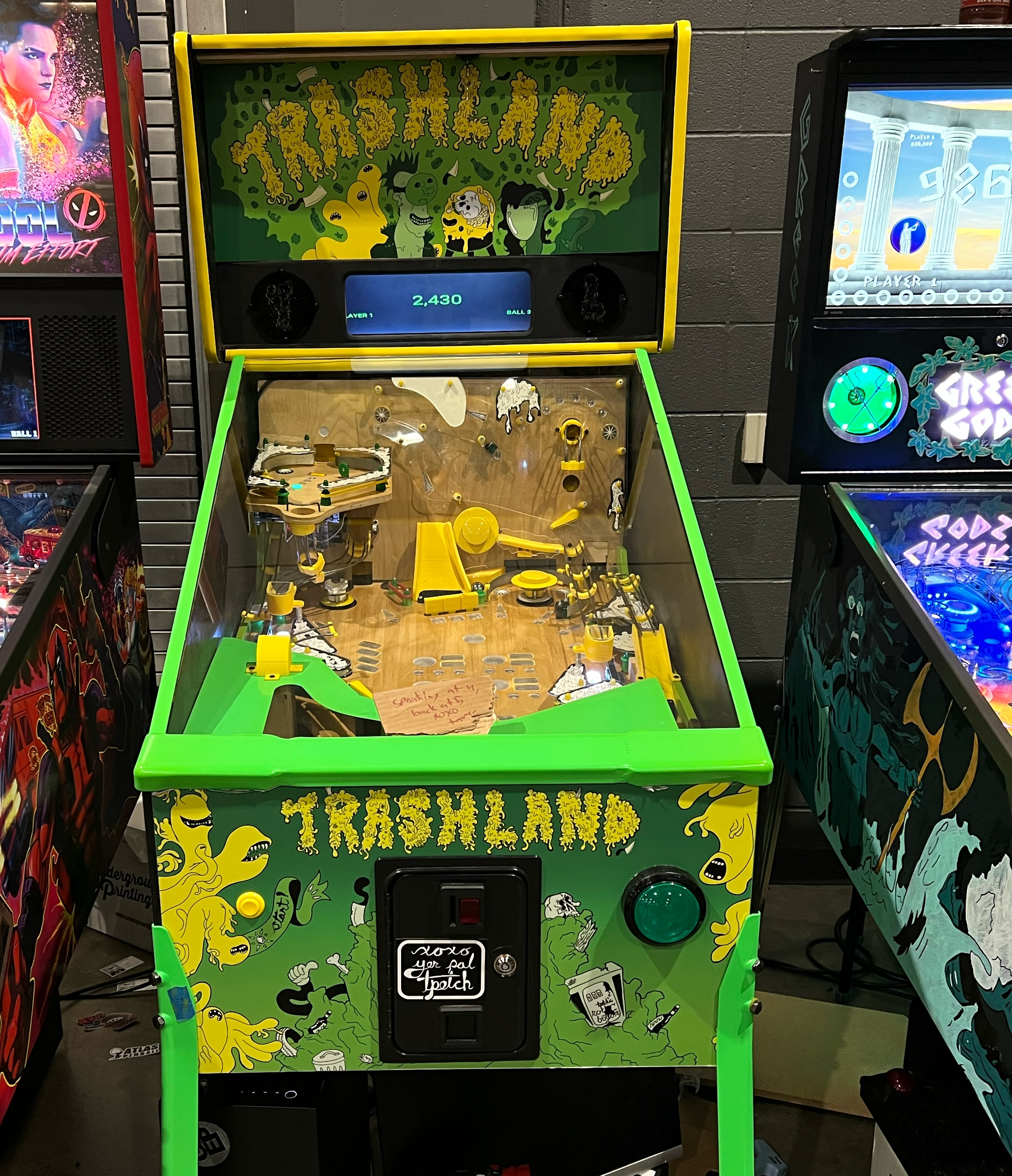 Attendees of this year's expo also got to play Ryan McQuaid's Sonic Spinball machine, which is exactly as awesome and theme-integrated as you'd hope! 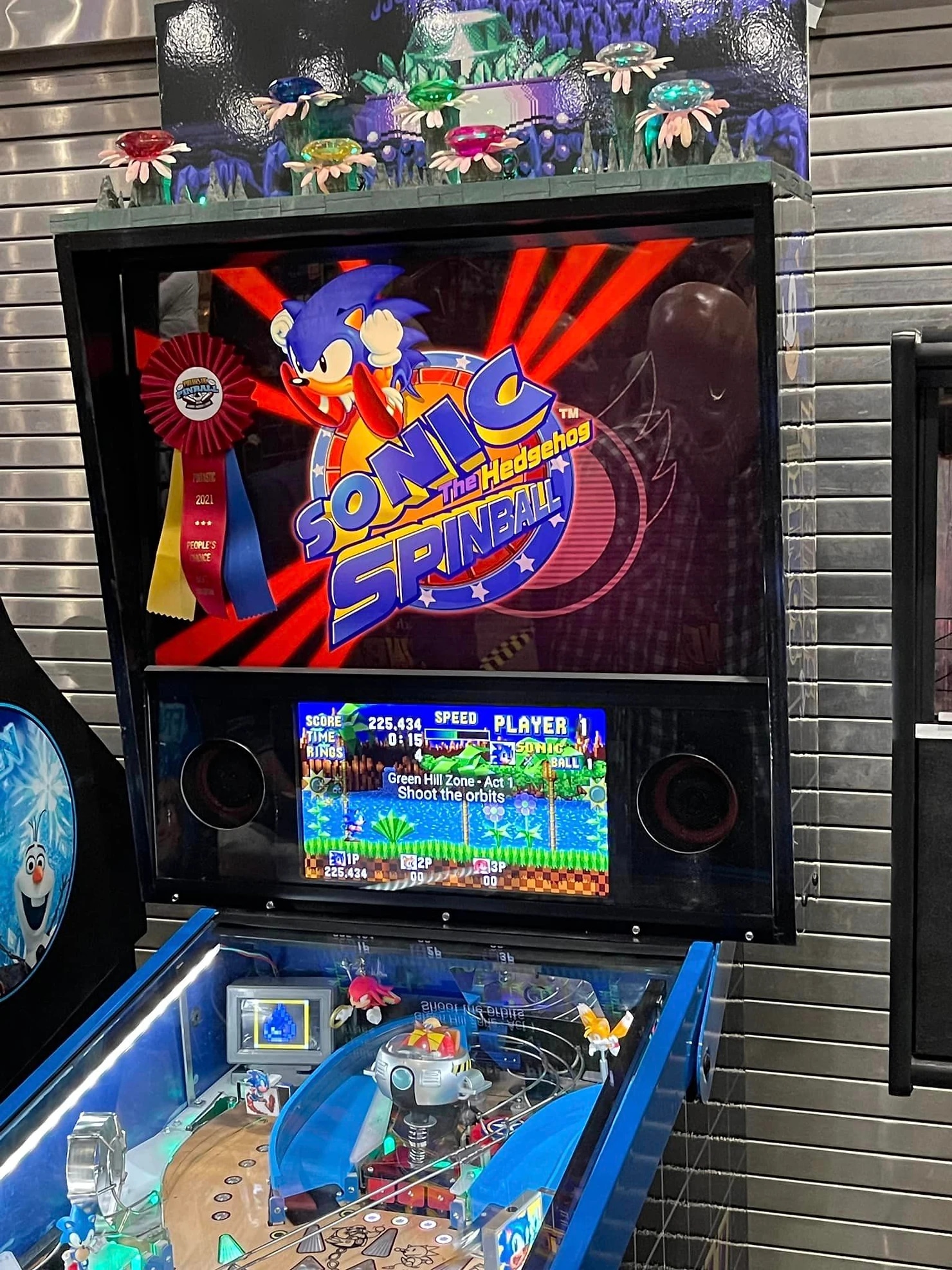 For most of this year, we've been talking about our upcoming next-generation modern platform, based around the FAST Neuron controller. In addition to having machines people could play running this platform, we had some "2D" machines on wood panels showing the various components of this newest platform so we could walk people through how it works and how these boards are used inside new commercial and homebrew machines.

We are putting the final touches on this platform as we prepare it for sale to the general public, which we plan to make available soon. (If you want to be notified when we have these boards available for sale, send me an email, brian@fastpinbal.com.)

Here's a shot of our booth in the final minutes of setup just before the show opened: 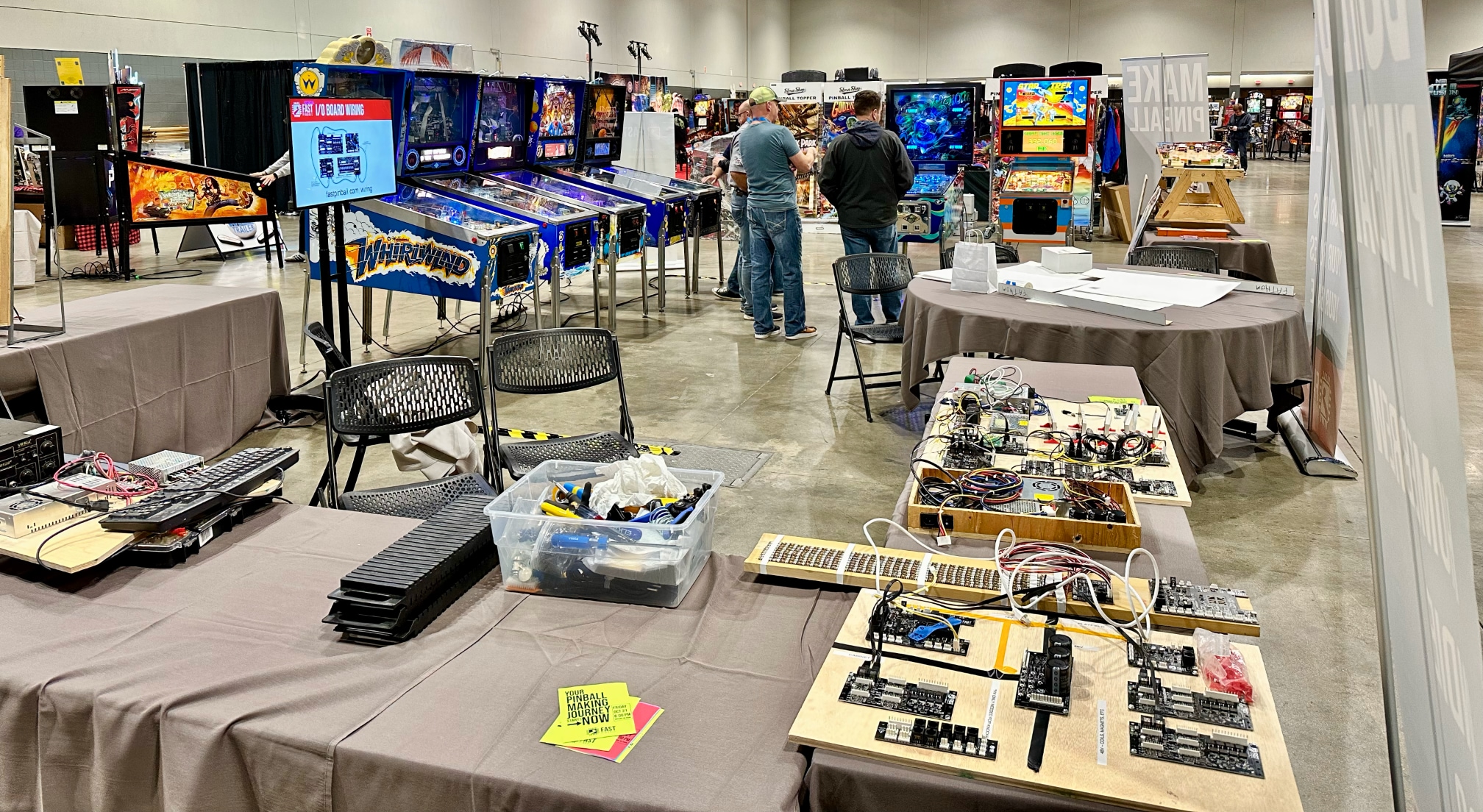 The wooden boards in the foreground displayed our FAST Neuron Controller, as well as our latest expansion boards, our new smart power filter board (with 48V current monitoring, short detection, and bad fuse detection), our playfield interchange board, audio interface, cabinet interface, and the the rest of our next-generation modern ecosystem.

We also demonstrated the test boards we use to measure LED power consumption and current requirements, as well as several RGB LED DMDs and segment displays. These demonstration boards allowed us to walk through our platform architecture with attendees and help them visualize how everything comes together inside a machine.

Aaron and I also gave a talk up in the seminar room on Friday afternoon. We have a separate blog post (with the video) if you'd like to see the details of what we talked about or watch the video. 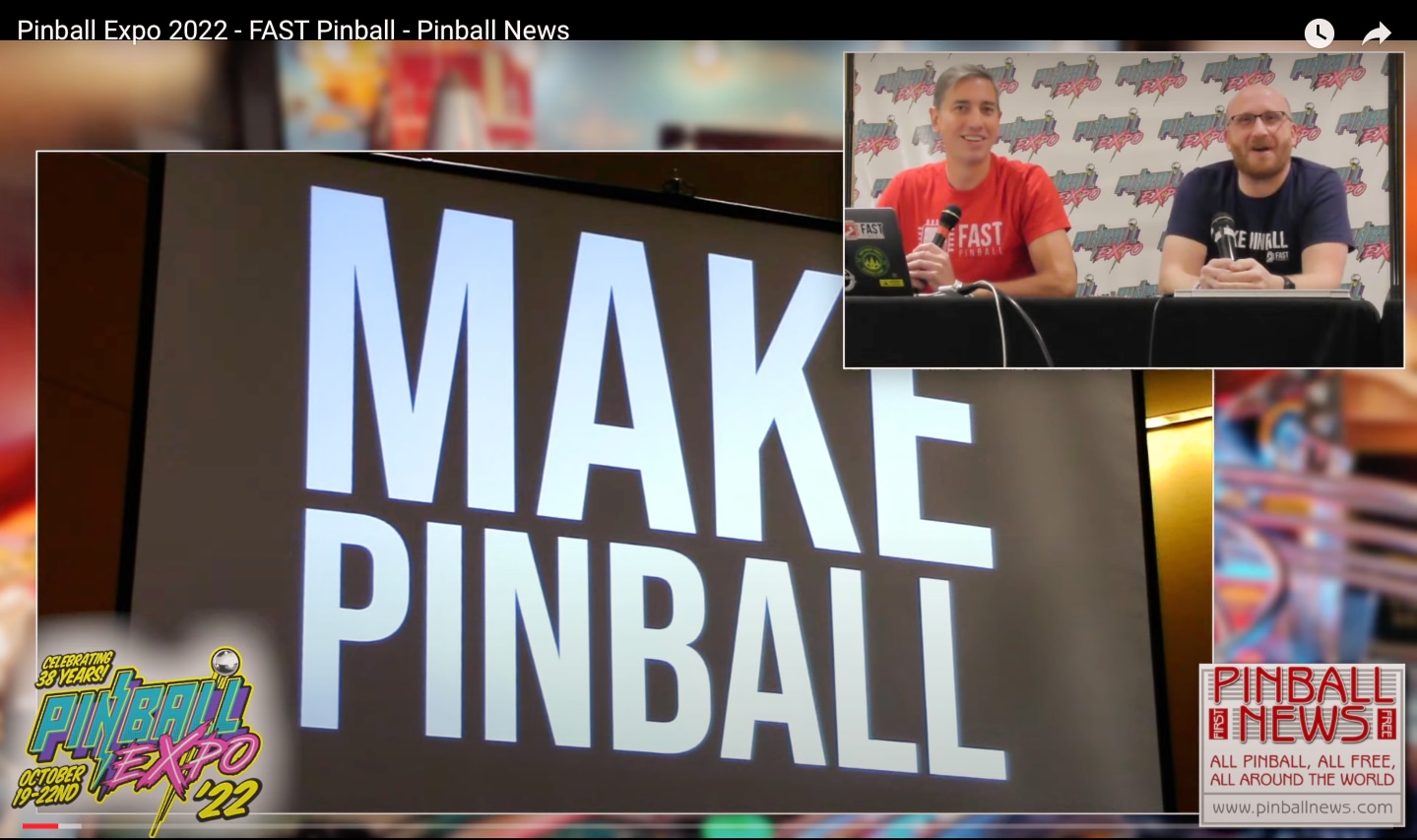 Our pinball making community is awesome!

Finally, we owe a huge thanks to the amazing folks who are part of our extended FAST Pinball family who helped make this show a success. Jacob Cord joined our co-founder Aaron Davis on the 2000-mile drive from the Seattle area to Chicago, pulling our trailer full of games, electronics, and show materials. Brian Cox and Gabe Knuth flew in to join Aaron, Jacob, and me to help staff our booth and explain the wonderfully-wacky world of homebrew pinball to bemused and excited show attendees. Tanner Petch and Ryan McQuaid brought their FAST-powered homebrew machines to the show's homebrew row. Anthony van Winkle provided the latest build of his work-in-progress Swords of Vengeance conversion kit for Swords of Fury. Mark Incitti (creator of the amazing homebrew Nightmare Before Christmas) and Quinn Capen (creator of the audio & video subsystem MPF uses) came by to join the fun. And our own Dave Beecher and Eli Curtz rallied up until the last minute ensuring our latest pinball tech was show ready.

The Chicago Pinball Expo 2022 was fun and exhausting at the same time. We saw and reconnected with so many friends, made new friends with current and future homebrew pinball makers, and played a lot of pinball together.

From Aaron, Dave, Eli, and me, we are so humbled and excited to be part of this amazing community of pinball makers. We're looking forward to seeing what's next, making pinball and making friends for many years to come! 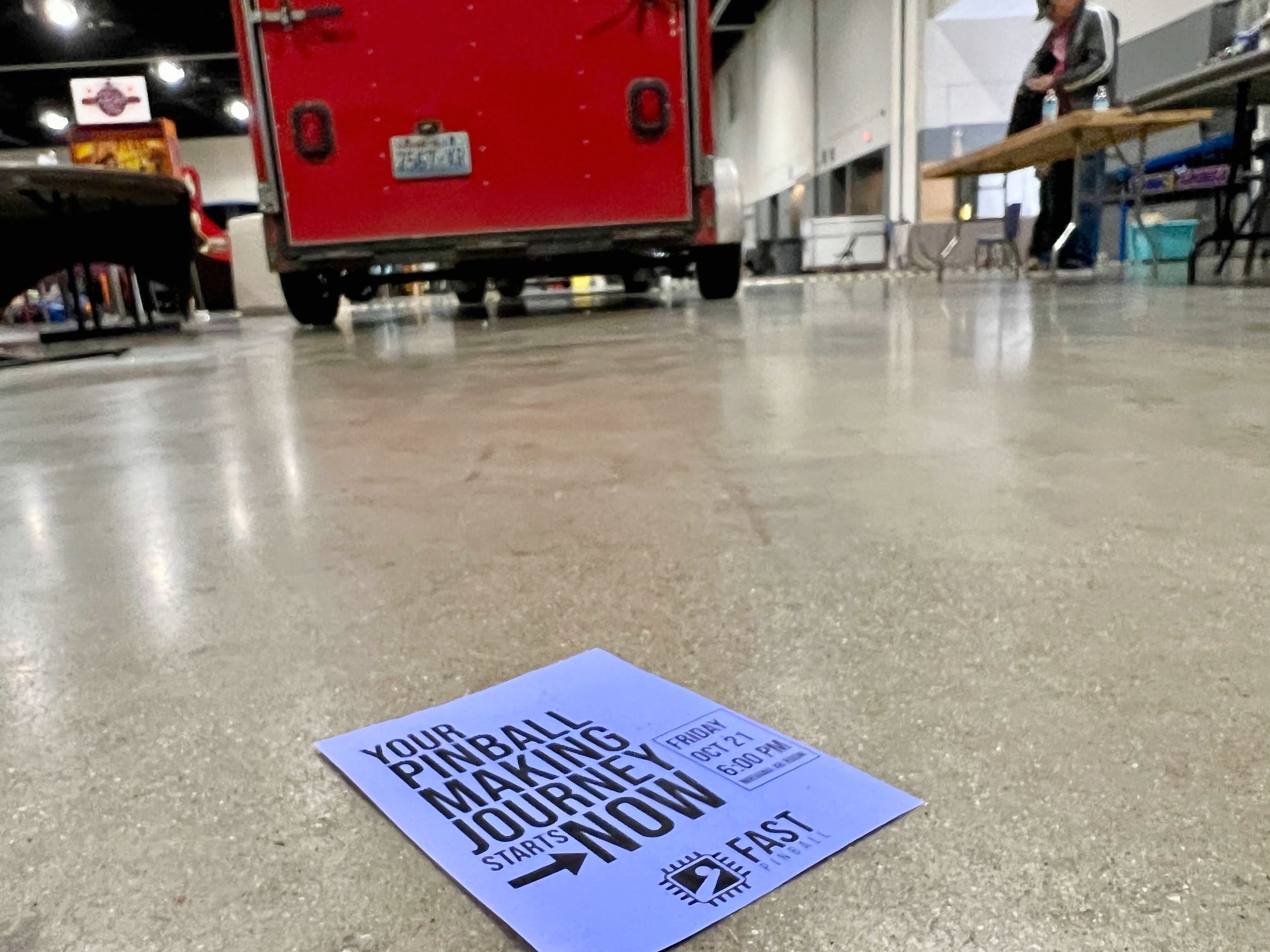